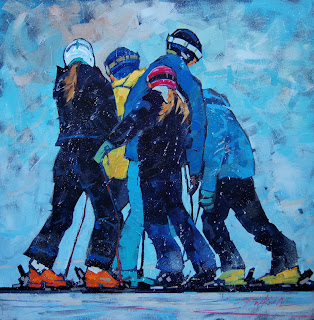 Its been a while. Have some oil efforts in portraiture to share - but not yet. This weekend I just needed to get back to acrylics and loosen up. Needed an easy project - its Christmas after all.

Fell onto some old images of young ski racers from the Collingwood area  of Ontario. One in particular showed the kids bunched together with interesting shapes and colours - and fun body dynamics. So I thought I would give it a try. And its been a while since I shared my approach to starting many of my acrylics so here it is again. 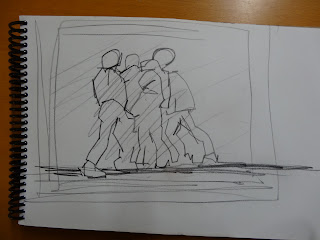 I begin by planning my drawing on paper. Then I draw onto the canvas using water soluble coloured pencil. Once happy, I then draw in with black China Marker, spray with water and wash down the water soluble pencil.  I neglected to photo this step so I have added an image from another painting being developed.

You can see the red pencil marks and the black China Marker. The canvas has been sprayed with water and the pencil is washing off. Quick wipe with paper towel and its gone. Have my final drawing to work with.

I then build my value underpainting. In this case I used Golden Liquid Payne's Gray ( never used Payne's Gray before but quite liked it - a deep dark unsaturated blue black). Again did not take a photo so image below is of a liquid transparent, medium and the colour shaper used to create the value plan. 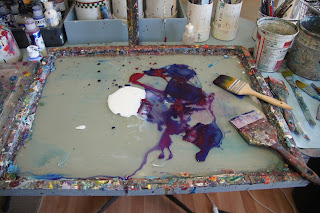 In the next image you can see the canvas covered and where I have dragged the shaper on its side to pull  the paint off generally and more specifically to make the lift off deeper (see figure on rt)  by pulling down on the edge. By this stage I have also added additional paint left over in my pools on the palette and applied them with the shaper. I also have "tested" by adding an opque cerulean blue. 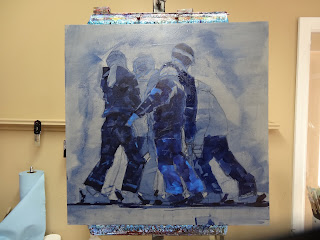 Now spots of colour and moving towards final fill in. 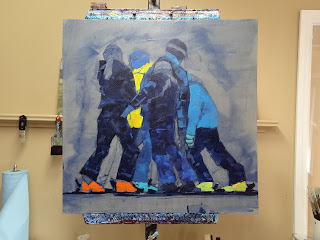 I keep adjusting my drawing as I go. I use white China Marker to make corrections on the dry paint.


That was fun and I liked the outcome. So dug up more photos and tried again.  This time I started on a gray canvas. Did the first Payes Gray application and pick out one half of the canvas at a time - because of the complexity and the fact that it dries so fast. Can still see some red on the right where I adjusted the drawing again. 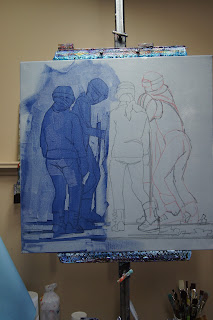 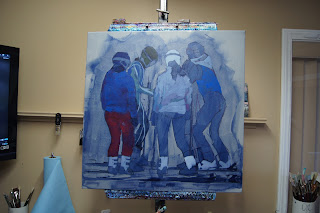 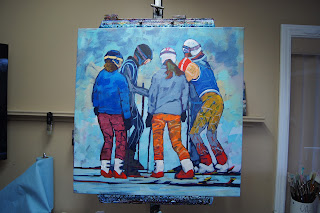 So finished - but not happy. Liked the composition of the first best - good strong grouping, good colour harmony, strong mother colour etc. Did not like the openness between the figures. Was going to add another , then decided to try something different - a big blue black spot - a black lab. This time I drew in with chalk because I knew I would not cover the drawing completely and the chalk can be wiped off after - the China Marker is only used when you KNOW you will completely cover the marks.

Then added "snow" have used a variety of things to apply snow like effects before. Recently purchased a  new tool from Liquatex and it works great. Much more control of size of spots and location. So used the Liquatex tool to splatter then a very light pull with paper towel to create direction to snow - light blizzard-like conditions. 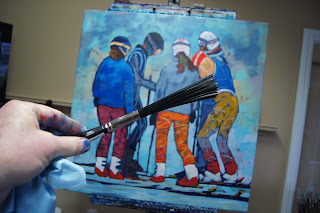 Then did one more from another image - 20x30 this time.


Simplistic, almost silly, paintings but easy and fun to do and have had very positive response to them. Shipped same day to White Dog Gallery in Whistler.