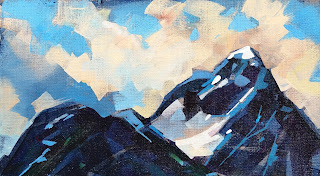 In the last two posts  I have shown my existing set up for plein air in acrylics.


Now make the starts - I say making a start because that is the mind set I need to have. From experience I know that the chance of making a finished painting on location is slim; the chance of making something ( a start) that, with  thoughtful reflection and freeing yourself from the limitations of the reference, there is a good chance you can make a painting that will stand on its own - be both interesting and one that will read ( represent what you are wanting it to represent). Those finishes can be made at home under controlled conditions or often in my case from my RV. I rarely use reference photos - but  just use my imagination helped by a lot of plein air to make the finishes that satisfy me.


And that is the trick for me - going far enough with the piece to capture the shapes and value pattern that the location suggests but not so far that I am committed to details or have gone to the point of not being able to save the work .  I would far rather start two or three paintings and take them only to the point that I need to think carefully before I overwork them, than to make one finished painting on site  that is generally not as strong as any of the three starts would be once I carefully consider my next moves for them.


My acrylic plein airs are generally larger than my oil starts - 11x14, 12x16 and 14x18. I work on 1/8 door skin - with gessoed linen or canvas mounted .  I either start with a toned canvas or tone it once I select my subject.


I select my subject fairly carefully - one of the best pieces of advise I got was from Robert Watts in San Diego - when painting on location always pick a battle you can win - or one that you can turn into a battle you can win (last part mine).  I always make one or more thumbnail sketches ( as described earlier) identifying the shapes to be included ( having decided what to exclude) and placing each in one of three values. I transfer the rough sketch to the canvas with water soluble colour pencil. I then make the final sketch with either graphite pencil, china marker or black marker ( Sharpie) depending on the subject.


Then I get to it. Sometimes I apply a dark transparent over the canvas and use my shaper to create a three value pattern ( see earlier posts) then go from there. Other times I block in my darks using transparents and go from there.


Did a couple of days of plein air from our RV. These are some of the first acrylic plein airs I have done this season - so I started with a very simple subject - light hitting the snow on a mountain peak.

So that is enough. Total time about 45 minutes. Set it aside to consider further and start another one.


Next, pulled my cart to the boats and started again. In this case I did my pencil sketch and then outlined the important lines lightly with the Sharpie. Then I played with a mix of warm colour to create a warm underpainting, then got at the opaques to "carve" the shapes. 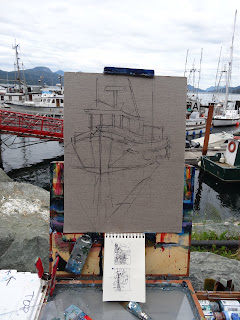 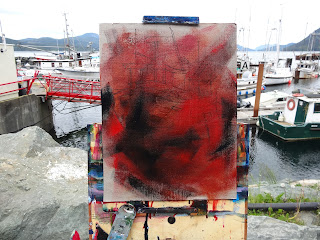 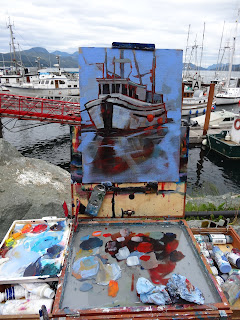 Set them up as a group, glass of wine and consider each. I always carry a mix of frames. Tried the first in a smaller, horizontal format frame and liked it better -need a cut down at home. 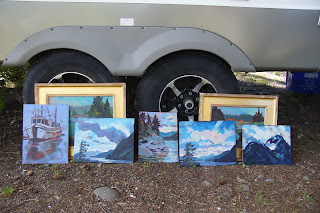 Next day, new location. First off the back of my pick up. Two starts of the same scene. Draw one, put on the underpainting glaze and shape the values. Its 6 AM and the paint is drying slowly so while the first is drying make the second sketch and using a different transparent glaze shape its value pattern. 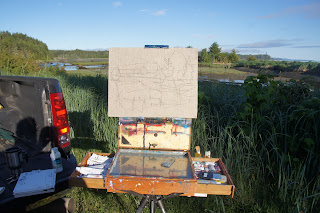 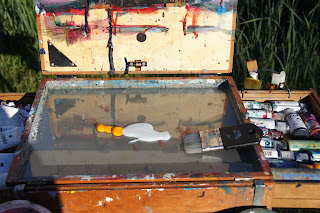 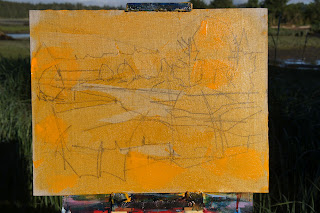 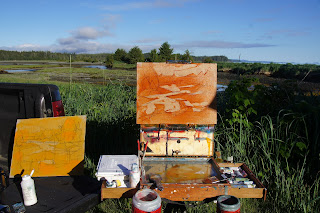 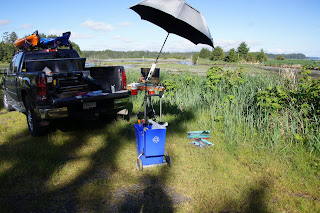 Later that day a few more. 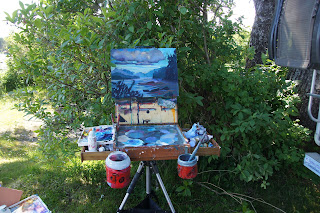 So two days on the road. Took home 8 acrylic starts and did 6 small oils ( thats another story).  Now I will spend time considering each for changes and deciding if any could become a painting.