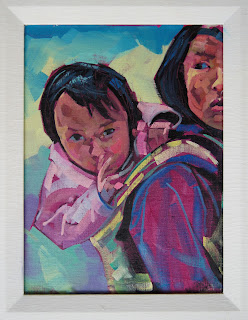 Gallery commitments and commissions done for a while.  So its back to play and, hopefully, to learning. Its been over a month since I returned from Watts Atelier and Weekend with the Masters. Normally, after an intense workshop I spend weeks playing with what I was exposed to. This time I had other commitments and have almost forgotten what we did. So I need some time for ME and to try to recover what I was shown.

I said when I went to Watts that my interest in figurative/portraiture is not to make more accurate paintings but to give myself more confidence to relax doing these subjects and to play with them like I do with landscapes - the goal is not to be correct/accurate  but to make the work interesting. So now I hope to protect time to be inventive and experimental for much of the next few months with the focus on people and people in landscapes.

So to start I thought I would play with a self portrait and see if I could come up with a likeness but with some punch.

I thought I would start with a bold brush block-in of values and a bit of colour temperature   Normally I would keep going - but I decided to just to the block-in then let it sit for a few days and come back and decide on the next step.

That was fun so I pushed ahead and tried something more involved. First I did a quick preliminary sketch  in oil on Arches Oil Paper from a photo given to me by friends Ron and Sandi Ulmi from their trip to Nepal. 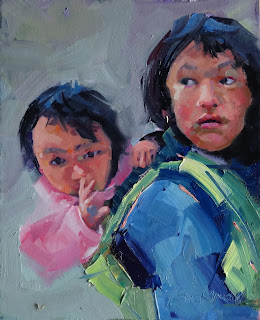 Decided that the image was worth playing with so would do like I did with my portrait above - a fast and bold block-in of values and colour temperature, let it sit for a few days, then come back to it.  Initial sketch with WS pencil then graphite on 12x16 linen. For fun I decided to glaze with Golden Magenta in matt medium to create the mid value. Then block-in with the same two large angular brushes. 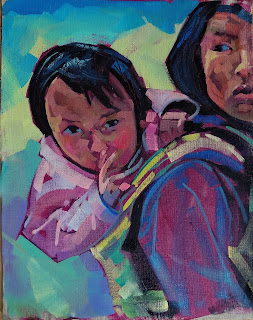 So let this dry and then decide how far to take it. Can be thinking of correcting drawing, playing with temperature and values to move planes forward and back and edges. But this is not for me about "rules" or doing what is expected - but trying something different - its about making something interesting  that I feel good about. So we will have to wait and see where it goes.

Have to admit I love working with large angular flats and brights and working on this linen - just grabs the paint off the brush and begs for more.